Hi! Hope you're all doing well.

I finally finished the first alpha version of my renderpass importer for After Effects, and I need testers to speed up the development. Its very alpha, a bit shaky code but it can already save you some time, or a LOT of time if you have plenty of passes. 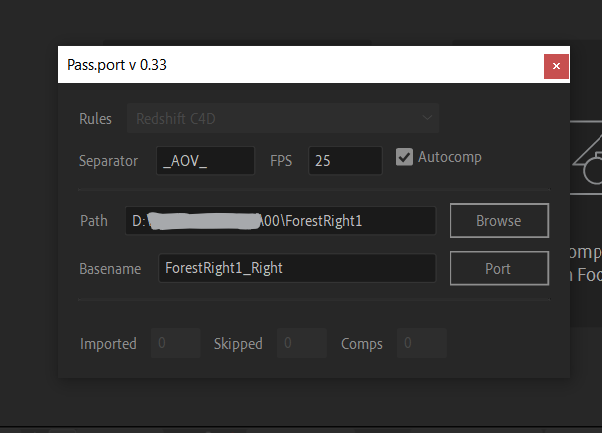 To make it useful all your passes must be in the same folder and share the same base name.

What it does not:

A tip for getting a consistent basename for your main render and passes with takes in c4d with tokens:

Or with the $camera token in the same manner. Pass.port will recognise this naming very gladly

You can run Pass.Port as usual using the Run Script menu, or place it into ...Support Files\Scripts\ScriptUI Panels to be able to dock it into your AE interface

It is a free script, but please do not sell it and do not include it in any products free or paid

Get it for free from the Pass.port GitHub repository and join my Discord if you're actively using Pass.Port and have some feedback/issue.